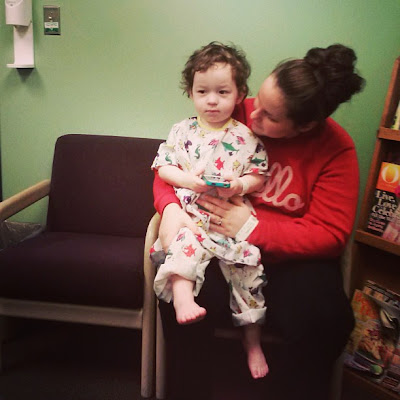 May 30th was Wyatt’s birthday – and it was also the day that he had his first MRI. The MRI was ordered because of his severe speech delay and because of the extra muscle mass in his legs that can sometimes be linked to the brain not getting enough oxygen during pregnancy. The MRI was preformed to look at his brain overall and that one particular part in general.

We arrived at 6:30am and Wyatt and I got wristbands put on – I think out of the whole experience – the wristband was the worst part for Wyatt. Everyday since the MRI he pulls on his wrist like it is still there! After we got our wrist bands I had some paperwork to fill out and then we were led back to the family waiting room where I dressed Wyatt in his little fish printed scrubs (photo above).

We waited for about an hour before the anesthesiologist came back to talk to William and I about what was going to happen. They wouldn’t let me take Wyatt back to the room because of the machinery that could be dangerous to the baby. So William had to do the hard part. I kissed Wyatt and William took him back to the MRI room. He hugged Wyatt hard as they put a gas mask over his face that put him to sleep. Once Wyatt was asleep they started an IV in his ankle with more medicine to keep him asleep throughout the 45 minute procedure.

That hour that Wyatt was away from us was the longest hour of our lives. We both cried and watched the door the entire time. Wyatt’s Nana and his Puppa were both there too – just waiting with us. And then out of the corner of my eye I saw the anesthesiologist carrying Wyatt into the recovery room. About 5 minutes later – when Wyatt started moving – they called William and I back to the room.

We walked in and saw Wyatt trying to escape. He was still heavily drugged and could barely hold his head up on his own – but his legs were kicking and he was trying to scoot off the bed. I went over and picked him up and William held his head to prevent it from flopping backward. I laid on the hospital bed with Wyatt on my chest as William grabbed his milk. He hadn’t been able to have milk since the night before so Wyatt was very excited to get it.

He looked like a little mole. His eyes were closed and hands were up gripping his bottle and holding it close to his mouth. We waited in that room for another 10-15 minutes until we were able to leave. William carried Wyatt out to the car because he was still unable to walk. We drove right home, popped in Toy Story, and snuggled up on the couch with Wyatt until he was ready to nap. The doctors said he needed “quiet play” for a few hours after bringing him home – so we tried to keep Wyatt still. He only made it about half way through the movie before he started to look sleepy.

He napped for 3 hours and when he woke up he was himself again. We took him to Toys R Us and let him pick out a few new cars for his birthday. He didn’t seem very upset at all after he woke up – I don’t think he remembered anything after getting the mask put on.

I just wanted to write this post to update everyone – I have gotten so many tweets, facebook messages, etc about Wyatt within the past week and I need you to know how much I appreciate them. You guys are just amazing and your support means the world.