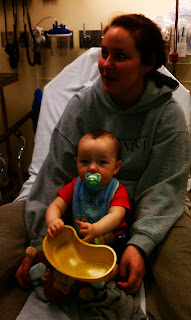 A few days ago Wyatt had his 9 month well baby exam and the doctor noticed that his head circumference {“hat size”} had jumped from somewhere in the 75th percentile to the 97th. He said this concerned him and asked me if Wyatt had been behaving any different or vomiting. I told him no and he said he would just follow-up in one month to re-measure Wyatt’s head.
I was a little worried, but I figured Wyatt was just going to be one of those babies with big heads, just like I was and just like William was. Until today when Wyatt threw-up. I called his doctor and spoke to a nurse- she said that it could just be a fluke but that it was concerning because in most cases too much pressure on the brain from swelling causes babies to vomit. She told me if it happened again, I would have to bring Wyatt in.
20 minutes later: I’m on the phone with my mom explaining the situation, holding Wyatt and kind of freaking out… and then he vomits all. over. me. I panicked hung up the phone and called his doc again. They told me… {and you’re not going to believe this} that they were ALL about to go on a 2-hour lunch break so if I wanted to bring Wyatt in, I’d have to wait 2 hours. Then the nurse said “oooh this is not good,” when referring to Wyatt.. ummm yeah right I’m NOT going to wait two hours!
So, we went to the ER and they did an ultrasound on little Wyatt’s head {My mom snapped this photo of us after- Wyatt’s hair with the “gel” in it.}. The doctor told us everything looked okay and that we should keep an eye on Wyatt & watch for any other symptoms. I also had to make a follow-up appointment for tomorrow to take him in to see his pediatrician.
Today was one of the scariest days of my life. Luckily, Wyatt was a champ – didn’t even cry and we were there for 6 HOURS. He handled the situation better than anyone else. He was smiling at the nurses and flirting with anyone who passed by.
The experience reminded me of this quote:

source
Feeling all of that panic and worry just shows how powerful a mothers love is, and how much there is of it in my heart for Wyatt. I am so lucky to be able to feel what it feels like to love someone so much. Don’t get me wrong, I LOVE my husband. But it’s a whole different kind of love that you share with your kids. And we are all so lucky to experience it.
Off to go hover over Wyatt –
xox,
Kendall

Sharing @ The Wiegand’s, Free Pretty Things For You

12 Comments on Wyatt’s Trip to the ER.