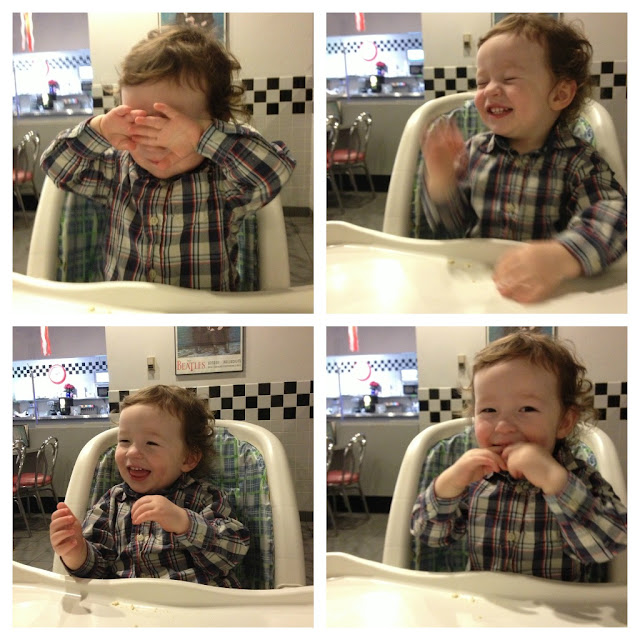 Wyatt is 19 months old.
And according to his doctor – he should know somewhere between 5-20 words.

But, it’s no where near 20. And the worry wort in me immediately jumped to the conclusion that something was wrong. But, when we went in to talk to his doctor she told us not to worry. She said he was just on the “slow” end when it came to speaking. And for some reason that’s been stuck in my head. Slow. I think sometimes parenting books and doctors are wrong. I think each child should be looked at as an individual and shouldn’t be blanketed by the “majority” or “average”. Wyatt may not know 20 words, but he is able to show me what he wants and needs. Nevertheless, I wanted to learn ways that I could work with him.

We were told that children usually know way more than they are able to say. That Wyatt recognizes many words, but has a hard time vocalizing. I wanted to find ways to help bring the words out of him. I feel like for awhile there I took over his speech – doing everything for him without allowing him to ask. I had to take a step back and re-evaluate what I was doing as a mother. A part of me felt responsible for his delay in speech. But I reminded myself that this is very common and as a mother you just want to help. That many kids have trouble getting the words out.

I’ve tried a few methods that the doctor mentioned.
And I have to say, that within the past week Wyatt has talked more than he did all of last month.

One of the biggest things is – I’ve started to ask him more questions, and he loves answering me!
Before he gets his morning bottle I say, “Wyatt, what do you want?” and he’ll reply “ba-ba“.
Yesterday I watched as William changed Wyatt’s diaper and Wyatt said “no-no da-da!”

It was amazing! I am going to fill another post with things we’ve been doing that have been working for us + things we are going to try. I’d love for you to take this journey with me if you are in a similar situation!

Was your little one a little late with the word game?
Do they still have problems talking?
Share your story!
Also, if you have suggestions for me – leave them in the comments!

18 Comments on talking about not talking.