The past month has been complete emotional chaos for my family.

We bought our first home, and moved in right before Christmas (the 23rd to be exact). Then we’re busy with Christmas events and festivities.

Right after Christmas, Wyatt became very sick. We woke up to him being incredibly lethargic and running a high fever so we called his pediatrician for guidance. They told us to bring him right in – we were there for maybe five minutes before they told us he immediately needed to go to the Emergency Room.

Once we got to the ER they did a chest scan because his lungs sounded off. The results came back and they told us Wyatt had pneumonia. They didn’t feel comfortable treating him at the hospital and wanted to transfer him to a Children’s Hospital that was just 45 minutes away. Unfortunately, on that particular night there was a terrible snow storm and the roads were awful, it took two hours for an ambulance to pick us up for transport, and the regularly 45 minute drive became two and a half hours.

It was the longest two and a half hours of my life.

I sat there, in the back of the ambulance with Wyatt as he was hooked up to his IV and oxygen just holding his hand and praying with every ounce in me that he was going to be okay. I was looking down on someone that was not Wyatt, it was a fragile, pale, sick little one with no energy. I don’t think he made a peep the whole ride, he just laid still and watched as the lights flickered out of the two back windows of the vehicle. I talked to him, brushed the hair away from his face, and just kept repeating the words “it’s going to be okay,” looking back at it now — I think I said that for the both of us like a mantra, because the more I said it, the calmer I felt. 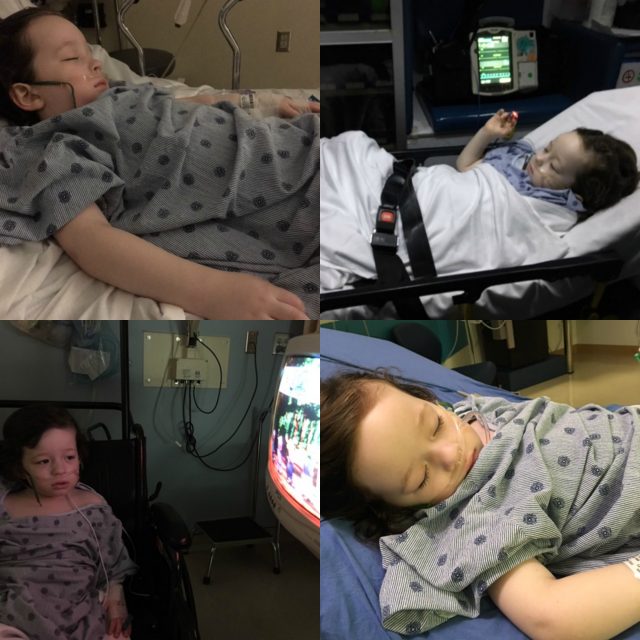 When we finally got to the Children’s Hospital, there was not a room for us. We waited another two hours to be put in a shared room with another little one and his family. We settled into the bed, I crawled in with him, and within minutes another doctor came in to tell me he wanted to do an ultrasound of Wyatt’s chest as well. After the ultrasound they discovered he had a bacterial fluid in his lungs that would need to be drained, this would mean surgery to put in a chest tube, and they wanted to wait until morning. I tried so hard that night to just comfort Wyatt and keep him calm so he could get some rest. I laid beside him in his hospital bed and just held him.  I don’t think either one of us got rest that night.

The next day they wanted to do a cat scan to really get a good look before doing surgery. We attempted to do the cat scan but it was all too overwhelming for Wyatt. Wyatt has sensory processing disorder, so things like doctors visits, strangers touching him, and new environments very overwhelming and frightening for him. They ended up having to put him to sleep to do the scan, I held him in my arms as they administered medicine in his IV and his body quickly began to feel heavier and heavier until he drifted to sleep.

Surgery was pushed back another day because they didn’t feel comfortable putting him under twice in one day. We went to return to our shared room, something I knew Wyatt would continue to find overwhelming. So I spoke to everyone I could about getting a private room when one became available. After a lot of begging and tears on my part, we were moved into a private room so Wyatt could have a quiet space to try and get some rest. 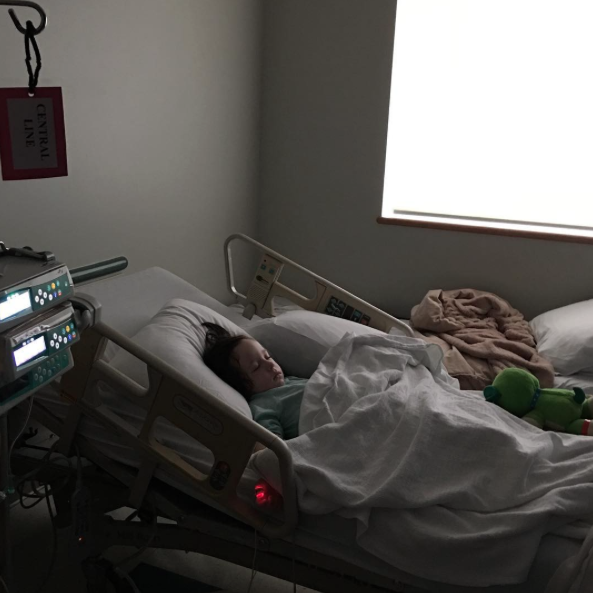 The next day we found out his right lung had collapsed, and that the surgery to insert the chest tube would also require them to go in and re-inflate his lung. I remember feeling like I had just been sucker punched in the stomach.

The tube they put in went right between his ribs and into his lung to help drain the fluid, it was on suction so the tube was slowly sucking all of the fluid from his lungs. At the same time they did surgery and re-inflated his lung, and they put a PICC line into his right arm. For this they guide a small tube via scan into a vein and leads it straight to his heart. Now that he had the PICC line, he wouldn’t need to be poked for blood draws, they could both get blood and administer medication through that line, no more pokes for him was such a relief.

When he woke up from surgery, he was groggy and in pain. They had him on Morphine and another pain medicine (I can’t remember) and he seemed to be getting more and more comfortable – until his face swelled up and he started scratching. After the surgery he had to wear a mask that administered medication for his lungs, they thought that perhaps he was having an allergic reaction to this, gave him some Benedryl, and he started to look and feel better. The next afternoon the same reaction happened and they quickly realized it was the Morphine – so he would be taken off narcotics and put on Tylenol and Motrin to combat the pain. Of course, Tylenol and Motrin were not nearly as strong as Morphine, so Wyatt was extremely uncomfortable and in so much pain.

Every time someone walked into a room, Wyatt cried. He was fearful of every doctor, nurse, housekeeping, and food delivery person there. Every time he had a scan, every time he had to be put under, every single event at the hospital was horrific for him. He didn’t understand why we were there, and he didn’t understand what was happening. And each time he cried it slowly broke another part of my heart. Seeing your child in pain and afraid is the worst thing. It was both emotionally and physically exhausting for us all.

We were in the hospital for a total of 7 days – doctors originally told us it would be 14, but Wyatt began to perk up from getting the fluid out of his lungs, and was doing an incredible job recovering. One morning he pulled off his oxygen tubes and was doing so well breathing on his own that they didn’t make him put them back in. Apparently, he knew he didn’t need it anymore.

The chest tube drained his lungs for two days, after getting it removed he really began to act more like himself. He was smiling, talking more, and we began getting him out of bed to go for short walks around the hospital. At first he was wobbly like a deer on ice, but as the days passed he became more stable. 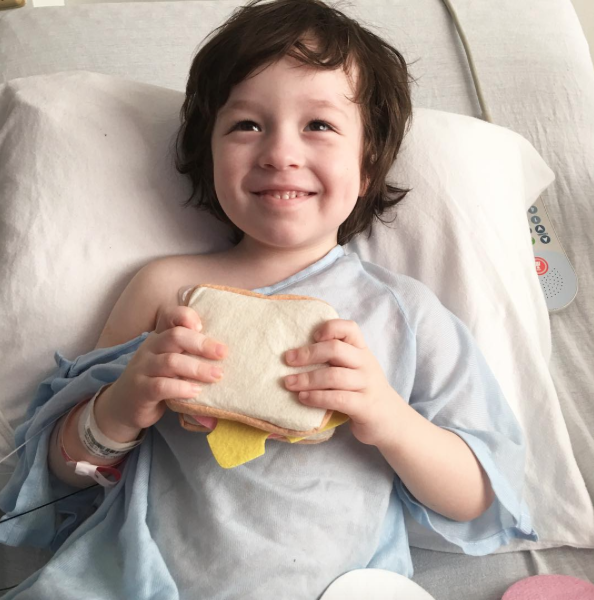 When we left (photo above is from the day we were released) we were sent home with the number to a home care nurse, prescription for IV antibiotics, and felt a great sense of relief that we’d finally be home. The next morning, a nurse came to our house to show us how to administer Wyatt’s medications through his PICC line and to change his dressing from surgery and the IV. We have an ongoing appointment each Monday for a nurse to come to the house to do this.

Wyatt was home a few days and was back to his normal self – and on the advice of his team, he even went back to school for an hour and a half a day. But, after only being home for one week – he spiked a fever. After a few calls, we were right back in Children’s Hospital for another two days. He had picked up a virus and we discovered that he was supposed to be sent home with TWO different antibiotics, (not one) and there was a “miscommunication” somewhere between the home care team and his doctor. I could go on and on about this – and how upset my husband and I were, but let’s just skip it. I’m sure you can imagine.

After two days on the right antibiotics, Wyatt started feeling much better and was released. We were more prepared the second time around, and Wyatt actually slept pretty well at the hospital. I was grateful that he was able to rest, but sad that he had become so used to sleeping in that environment. 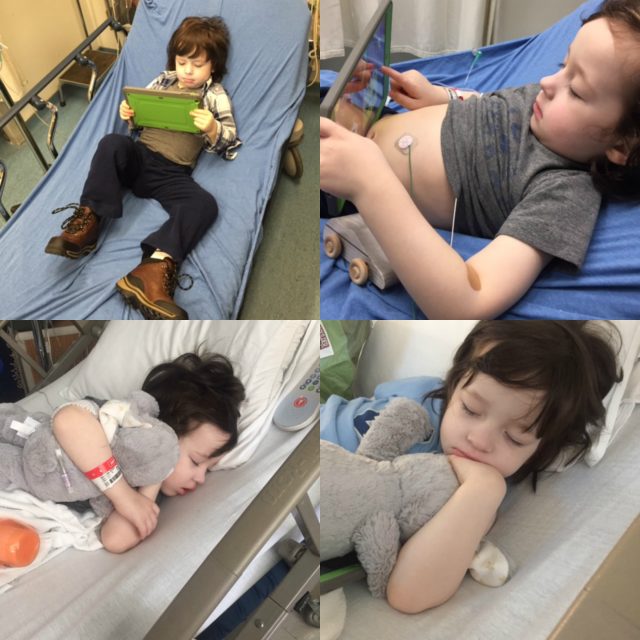 In the past month he’s gone through things no four year old should. But I am so incredibly grateful that he got better and is on the mend. We still have a string of appointments and medications, but he’s better. Being in the hospital for that week really opened my eyes to just how lucky we are. And when I wake up now in the morning I feel both calm and relieved knowing that both of my babies are asleep, tucked into their beds.

Wyatt is not allowed to go to school until his treatment is completed. He’s in a special education pre-school program and we’ve made arrangements for his teacher to e-mail his homework and activities so we can complete these at home with him. He’s on track to go into a kindergarten program next year and we don’t want him to get behind, and Wyatt absolutely loves school – so I know my husband and I being his “teachers” is definitely not the same for him, so we’re trying to make it as fun as possible.

After all of this, I’ve really realized — We are just so, so lucky. And this whole experience, although one of the hardest things we’ve ever had to go through, has made us closer as a family. It’s made me appreciate every little moment that I have with my sons. And this post, which was difficult to write, was begging to be recorded – each word recorded was like another ounce of sand being drained from the bags on my shoulders, so I thank you so very much for letting me do that.

11 Comments on Wyatt, Pneumonia, and his collapsed lung.